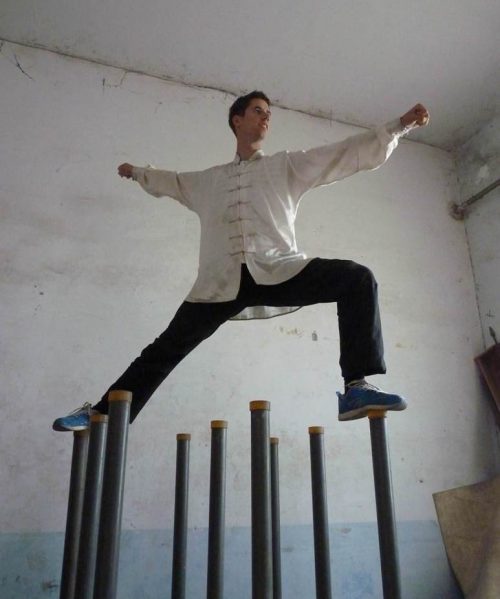 This year I update my recommendation which I wrote 5 years ago in 2009. A lot has happened since I arrived at the age of 24 first in China. Back then, there was no school terrain yet. A couple of months after my first training, the school properties were bought. Because at that time the school was just created by 2 disciples of Meihua Quan Kung Fu, I was the first and only foreign student. One of the founders graduated from law university and trained a lot of Meihua Quan Kung Fu during his student years, and the other one was an ex-shaolin monk and Shifu who after the performance team of Shaolin decided to embark on a quest to find ‘real’/ authentic traditional Kung Fu in China and was close disciple to the Meihua Quan 17th generation Grand Master Shiye Han Baiguang. So, the division was made and one would handle the business side, the other would be the Kung Fu headmaster of the school.

When I started training Kung Fu in China 5 years ago I was fairly new to the Chinese Martial Arts. Before I practiced Karate since I was 9 years old and then later switched to try a bit of Capoeira and a bit of Muay Thai. Before going to China, I joined the local Hung Gar (southern Shaolin) Kung Fu School in my city to prepare for a couple of months for the trip to come.

In China we started training at the local army training place just north uphill of the school terrain where we train now. The training was great, spectacular surroundings , Chinese food of which you can always fully stuff yourself and a the whole Kung Fu curriculum waiting to be explored.

After 2 weeks of mainly practicing Meihua quan and Weapons, I was asked the question to go to Pingxiang, the birthplace village of the Meihua quan kung fu and where many grandmasters are buried. I remember the nice way of asking: It was ok to stay at the academy in Tashan, but if I’d like to come to Pingxiang we would be going there. I said yes, and we went! There we had great adventures with many Kung Fu masters and I got the chance to meet with the Grandmaster who taught me some small corrections. After the 2,5 months of practice I decided clearly to come back again in the future.

In the end this was already really soon, because 3 months later I was already back. Now not for Kung Fu, but for setting up an ebike business by working together with Chinese manufacturers. My Kung Fu brothers were very much eager to help with this which I highly appreciate.

Back in Holland, after graduating and starting to work I was already afraid that the foreign Kung Fu opportunities were almost over for me, until I saw an opening that I could try to get 3 months off from work to help with the now already grown school in the summer of 2013.

Once again, the trip to China proved to be an amazing journey and Training. The Shifu’s were still the same as I remembered from 3-4 years ago, which was very good to meet up again. My Kung Fu interests changed over these years and I noticed that I was getting more and more intrigued by the soft and internal styles to go deeper into the feeling of Chi. My Tai Chi greatly improved this period.

By now there were many foreign students at the school which made the atmosphere nice (sometimes almost more western than Chinese;) and there were many activities to be undertaken. This year I returned again to study Kung Fu, giving expression to how much I love this place and to practice Kung fu. I hope that you will find your way in Kung Fu and that it will be a treasure for you during your whole life, the easy and the hard times.

Tianmeng Kung Fu Academy is well set-up now. The rooms are everything you can expect of in a Kung Fu academy. It is not a hotel and also not a Spa where you will be staying. But you do have your own nice room. The showers are clean and nice, and the toilets are western and clean. The academy ground is really good, because of the love and dedication which have been placed at creating authentic traditional training methods and equipment. For example, the Meihua poles, the Boxing bags which are being placed outside under a rooftop (helps in case of rain), the weapon equipement, stretching and hard qi gong tools, the wing chun dummy’s (there is even one with an own, different design than the normal one – designed and created by the head master and maintenance man).

The whole area is surrounded by a beautiful mountain range. If there is enough rain, there are lakes where you can swim and waterfalls. Nearby there is a very bea

Related Experiences Of The Students

With this letter I would like to express my heartfelt gratitude to Tianmeng Academy. I spent two months in the summer of 2013 and 2014. I’ve returned to the academy for a second time and I will do that as many times as I am able to. This is not...
★★★★★ 5/5
Antoniya Stoyanova
Bulgaria
Read More
My name is Rafael, I am 24 and I am from Brazil. I spent one month in Tianmeng Academy. I felt like I was at home. The atmosphere is really friendly. The dorms and facilities are clean and comfortable. The place is simple but cozy. All the staff are great...
★★★★★ 5/5
Rafael
Brazil
Read More
My name is Nadja, I was happy to practice Kung Fu in Tianmeng Kung Fu Academy more than 2 month; this is really a great place to stay. The Academy is special because of the friendly atmosphere and a pleasant natural environment. I have got a Chinese grandmother, my sister...
★★★★★ 5/5
Nadja
Germany
Read More